I doubt many people will take note of this, given this forum's desolate state, but since this is probably the only semi-appropriate place to talk about Humongous Entertainment's failed spiritual successor, Hulabee Entertainment, I suppose I should mention this here just in the off-chance someone finds it.

Anyway, someone wrote a Python 2.7 script for extracting the PAN files used by Hulabee's engine. It can be found here: https://github.com/cyxx/hulabee

Unfortunately, I have no idea how to work with Python the intended way. I was only able to get the script to work through the Windows command prompt, which is clearly not right because it doesn't support wildcards, so I had to use it on each file individually.

This actually worked for most of the games' audio files, but images are a mixed bag. The engine seems to use three different formats, and the only ones I was able to open were the JPG ones. Those are generally used for full-screen images. There's also a proprietary IMG format that can supposedly be converted with a second script on the site, but it requires the Python Image Library, which I was unable to install no matter what I tried. Even then, converting all these images without wildcards just wouldn't be practical. And then there's another format called CAN which doesn't seem to have been reversed.

I haven't listened to most of the audio files yet, but there were a few interesting finds among the JPG images. Apparently, the company's first three adventure games have debugging features similar to HE games. (I wouldn't know about Piglet's Big Game because it has virtually no JPG images.) They all have a room selection screen showing a map of the entire structure. Here they are: 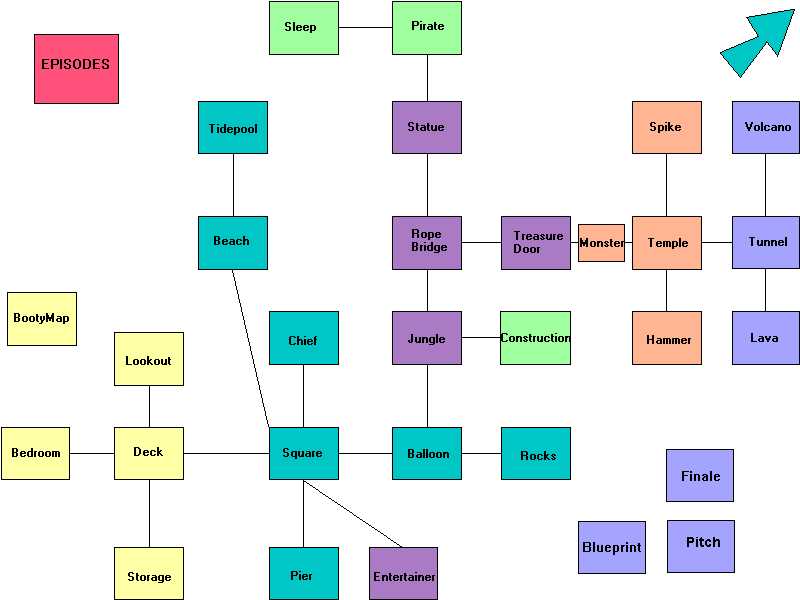 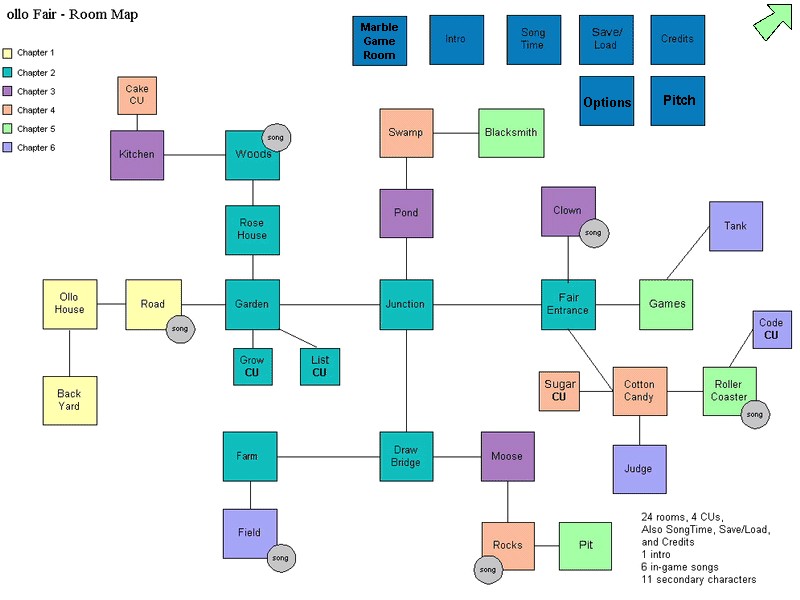 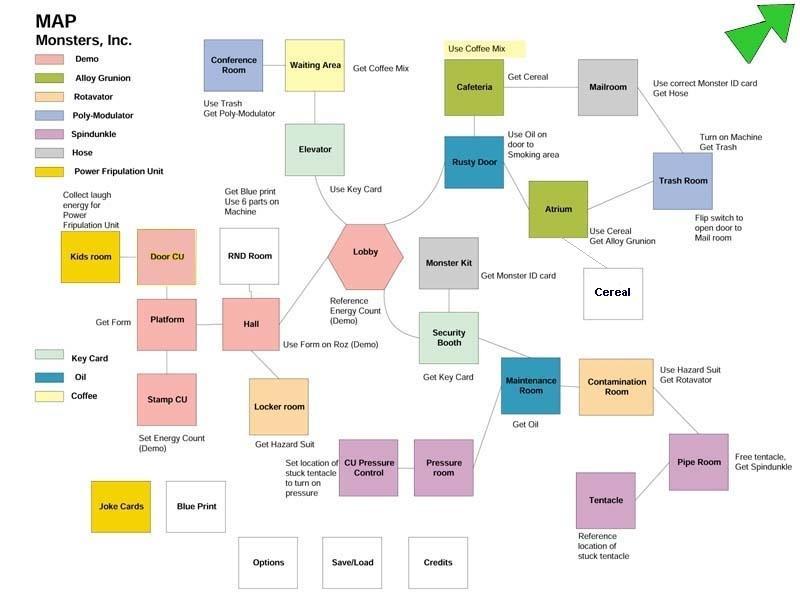 I don't see anything too notable about the first two, but Mike's Monstrous Adventure has two semi-interesting details. For one, Delta's role was originally going to be played by Roz. Also, it seems the game was supposed to have a demo. I unsuccessfully searched for it long ago, so I'm not sure if it really exists, though I recall one guy here claiming to have played it.

The game also has a screen for altering various flags and variables: 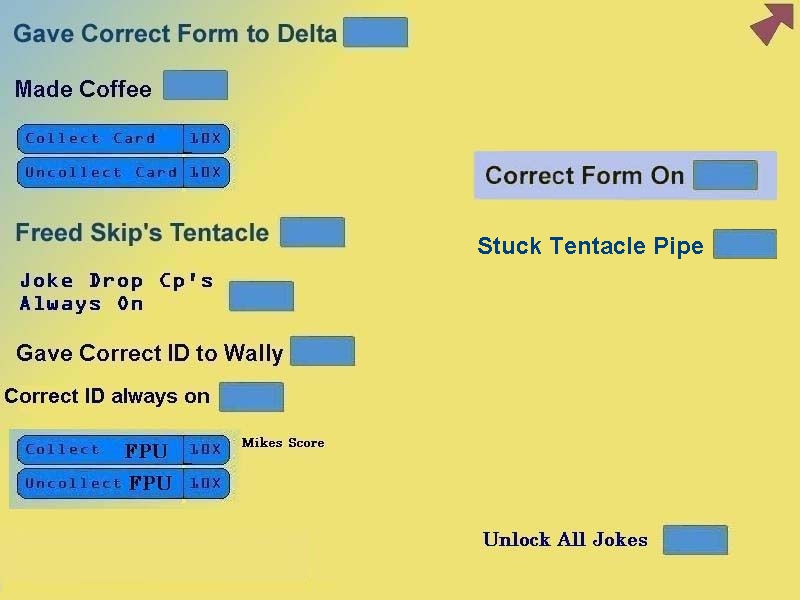 Nothing unusual here, though the ability to instantly get all joke cards would make it way less tedious to get 100% completion.

Some of the games also have these two screens related to an autoplay feature: 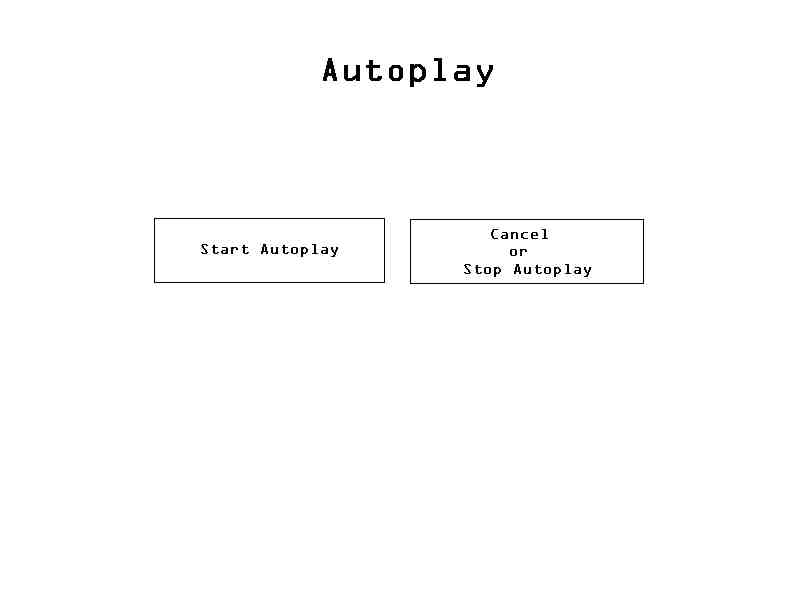 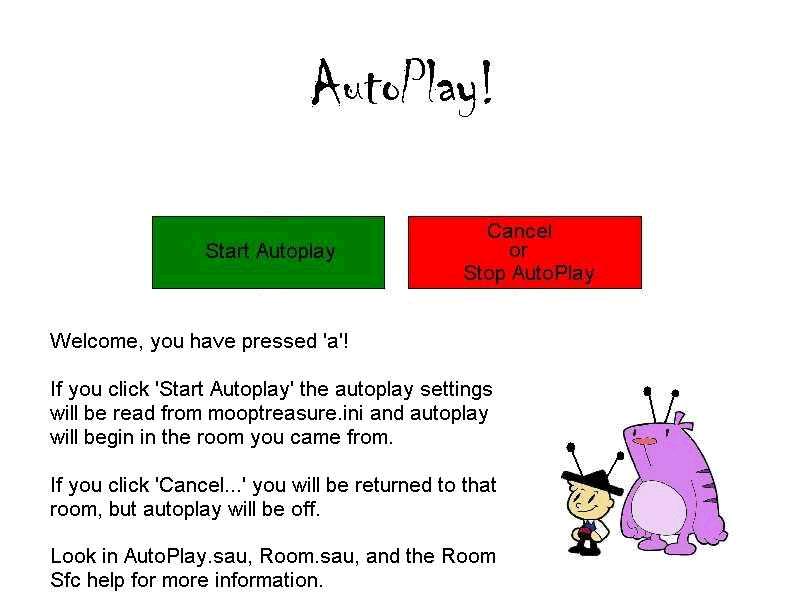 If it's like its HE counterpart, this probably just makes the games perform random actions.

Finally, the demo build for Moop and Dreadly in The Treasure of Bing-Bong Island included with Sonny's Race for Chocolatey Taste also has an item screen: 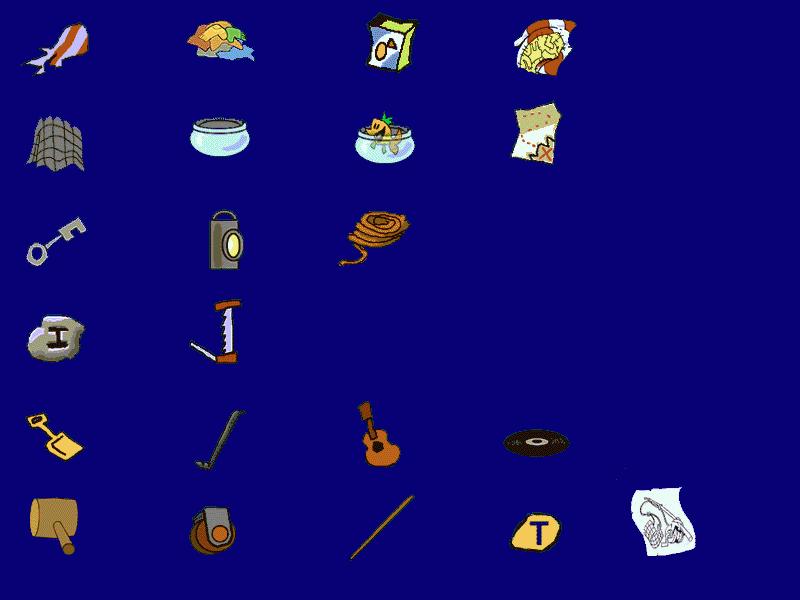 It's strange that only this early build seems to have it, but maybe the image was converted to IMG later on.

Unfortunately, I have no idea how to activate any of these debugging features, assuming they're still functional. This would probably require reversing the engine itself, and with Hulabee being such a disappointing failure of a company, I doubt anyone cares enough about them to do that.

This is really awesome! Though python 2.7 seems like a weird choice, as I don't think it's supported anymore. But I'll get on trying to make it work.

(And maybe I should make a Hulabee section of the forum. And if anyone has any other ideas for improving things, I'm all ears.)

Update: decode_img's pil addiction seems satisfied by the python-imageio package in Ubuntu, but I can't get it to produce any output. Only files I found by extracting my copy of Ollo are these:

If you manage to get these scripts to work the intended way (with wildcards and IMG conversion), could you tell me how you did it? The main problem I have is that the PIL installer claims I don't have Python 2.7 registered. I looked up what to do in such a case, but the only instructions I found involve editing registry keys I simply don't have. Even reinstalling Python 2.7 changed nothing.

SomeRandomHEFan wrote:If you manage to get these scripts to work the intended way (with wildcards and IMG conversion), could you tell me how you did it? The main problem I have is that the PIL installer claims I don't have Python 2.7 registered. I looked up what to do in such a case, but the only instructions I found involve editing registry keys I simply don't have. Even reinstalling Python 2.7 changed nothing.

Oops, I did but didn't notice your post, or I'd have replied. I'm pretty sure the author intended this to be run on Linux, and I've no idea how to run python scripts on Windows, though I might be able to ask someone.

Update: Nothing interesting in the Moop demo's IMG files, and there aren't any in the full game. I guess IMG is only used in very early releases, and they switched to CAN at some point? I've no idea what format this is supposed to be unfortunately. (There's CAN files in Sonny too, so I've no idea where the hell this data went...)

Nice to see you're having fun taking the games apart on Twitter.

Regarding the weird illustrations in Piglet's Big Game, I'm pretty sure those are not actually unused. They look familiar to me, so they're probably from Eeyore's painting mini game.

Also, Mah Jong Jr. is not the only game Hulabee made after Piglet's Big Game. I actually found three other games from them that nobody seems to have noticed, though they're also just small downloadable games. And yes, the scripts also work with them.

I should probably make a topic about them one of these days, though I have yet to play two of them. Long story short, if you thought Piglet's Big Game was a disappointing conclusion to the company's history, you haven't seen anything.

If you're reading my tweets, then I guess you also saw that I saw the link to Mah Jong you posted a few years ago. Not sure how I missed that the first time, sorry.

If you want to check out the three remaining games from Hulabee's dark age, their names are Casper's Spooky Swap, Flip Out Jr. and Touchdown Madness. All of them were also available on Oberon Media's site and were archived by the Wayback Machine. I'll locate their links when I get around to making a topic about them.

Bit of a warning if you intend to actually play them though: The free trial DRM isn't quite as nonfunctional as I assumed when I wrote that topic about Mah Jong Jr. several years ago. When a lot of time has passed since the first time they were run, they will refuse to operate.

Okay, I finally managed to get the IMG conversion script to work by setting up a VM with Ubuntu 18.04 and installing the PIL there. It was a total pain, and I don't even really understand what finally made it work, but now I was able to take a closer look at the extracted data. Due to the lack of any way to render CAN images viewable, we still can't see most of the sprites, but there's still some interesting stuff.

I now finally understand why that old demo for Moop & Dreadly that was included with Sonny's Race for Chocolatey Taste is so much larger than the demos that were later released online. It seems to be based on an early build that had yet to be optimized for digital distribution, so most of the backgrounds still used the IMG format. For the later demos and the full version, they converted all of those to JPGs with an extremely high level of compression. They look pretty bad compared to what the early demo had. Here's an example: 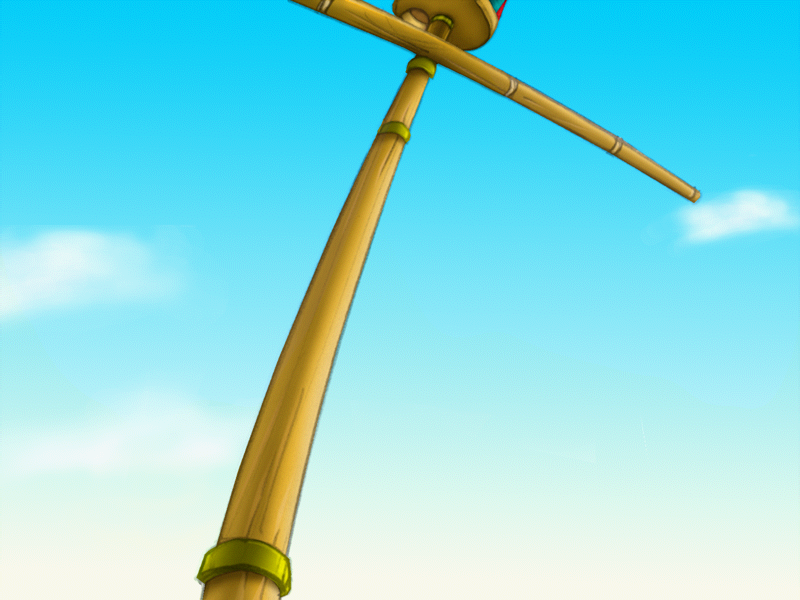 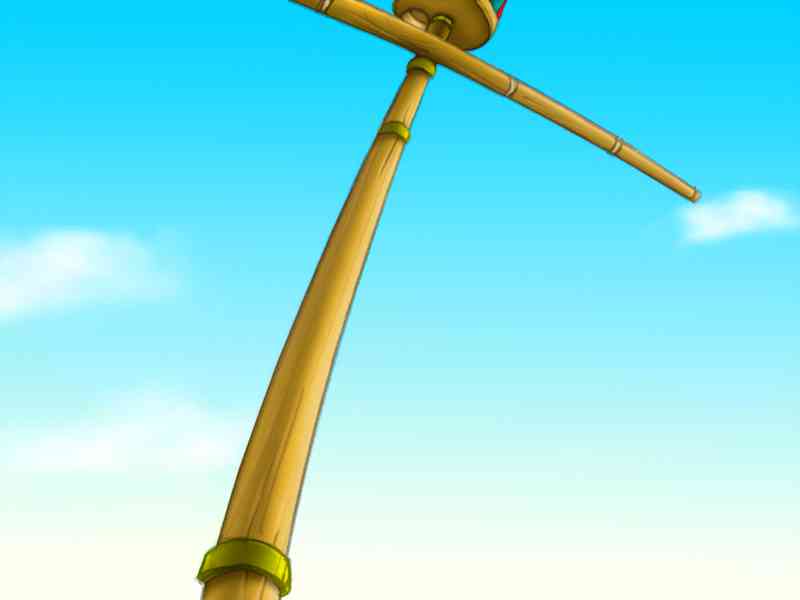 I realize the game was originally meant to be sold episodically in the form of DLC for the demo, but when that plan fell through and it ended up getting a physical release instead, they really should've reverted them to the IMG backgrounds or at least reduced their compression strength (which is what they'd end up doing with some of their later games). When you have hundreds of megabytes available, you really don't need to go as far as to compress all of your backgrounds to a size of less than six.

It's worth noting that the PAN extraction script doesn't work as well with some of the games whose existence its creator was unaware of. It throws an exception on some of the PAN files for Treasure Planet Training Academy, Stitch's Blazing Lasers and Little Mermaid Bubble Blast, so I couldn't get all their assets. Bit of a shame, since Treasure Planet Training Academy has a surprisingly nice soundtrack that I can't fully extract. Also, some of the files that are given the WAV extension (some of which are actually MP3 files) are not extracted correctly, but they can be fixed by removing the garbage before their RIFF headers.

Examining the extracted data for Mike's Monstrous Adventure made me realize there's actually a way to downgrade the game to its elusive demo version, which I was never able to find. Apparently, all the data exclusive to the full version is located in Monsters1-000200.pan and Monsters1-010200.pan. Remove those files, and the game will notice their absence and run in demo mode. There's not a lot to say about it. It just has a slightly different title and makes the credits roll when Mike is about to run into George. But it's nice to finally know what it was like.

Didn't find a huge amount of unused content in the games overall, but there was still some. Here are the most noteworthy finds:

-Lots of placeholder art in Sonny's Race for Chocolatey Taste. You can tell that the developers never cleaned up the assets properly, probably because they were under little pressure to conserve disk space. Would also explain why a lot of its voice clips have an unusually high quality by Hulabee standards. 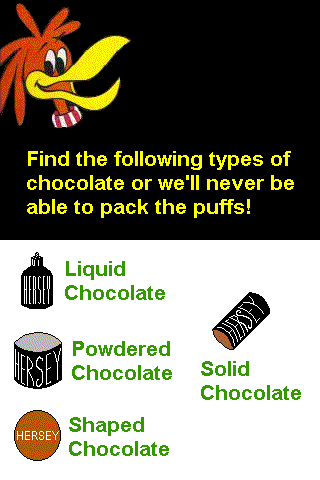 -Unless it was converted to CAN, the item debug screen I found in the oldest demo build for Moop & Dreadly is completely absent from later versions. And there's nothing like it in the company's later adventure games. Either it was deemed unnecessary, or they started removing those prior to release. The latter wouldn't explain why they kept including the backgrounds for some other debugging features, though. Or perhaps they changed the way item debugging is handled to something that doesn't use a GUI.

-As was already uncovered by Onfy, there's a room debug screen for Piglet's Big Game. It refers to it as Piglet's Culinary Adventure, so the name was probably changed to trick people into thinking it's a movie tie-in instead of an unrelated licensed game that simply happened to be made at the same time. That screen also claims that the first few rooms would be covered by a demo. I couldn't find any confirmation of its existence, and downgrading the full version to a demo by removing certain PAN files doesn't work here. Either the demo uses a different build, or it was scrapped. 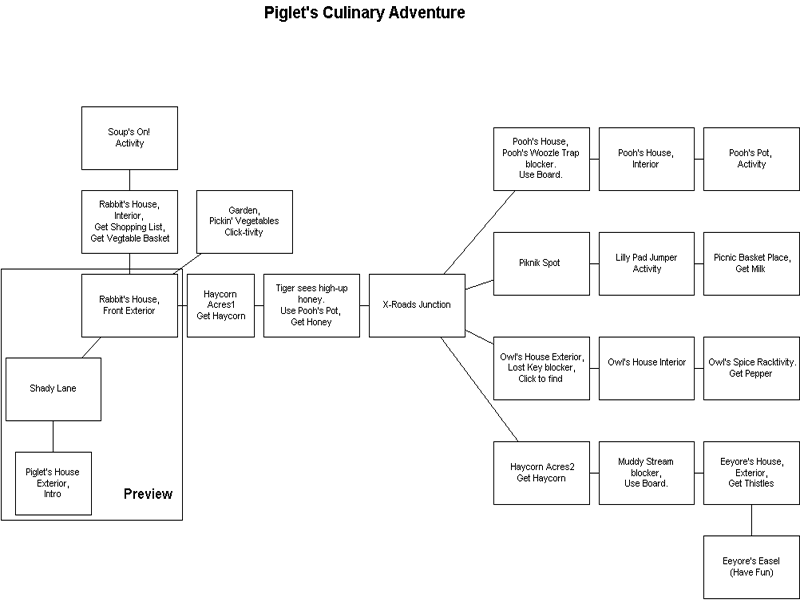 -Piglet's Big Game has some alternate takes for a few of Owl's lines where he uses British words instead of American ones (Zed instead of Zee and Aubergine instead of Eggplant). They were probably recorded for a UK release. Honestly though, hearing Owl use American words just feels weird, given his British accent.

-While Mah Jong Jr's actual soundtrack consists of two recycled tracks from Moop & Dreadly, the tracks from Flip Out Jr are also present in its data, and in much higher quality.