Greetings fellow adventurers. Some of you might recognize the items you are about to see from my Youtube video (I'll put a link here later, once I'm actually allowed to). Well, since Youtube isn't the best for picture galleries, I thought I would provide higher-quality images as well as more explanations for the items found in the box.
For those that don't already know, I ordered a copy of Fatty Bear's Birthday Surprise from Amazon.com, thinking that I was going to get a copy on CD. When it arrived in the mail a few weeks later, I was surprised to find that I had the original release of the game, with all of the merchandise in the box. Even more interesting, the game was on floppy disks! 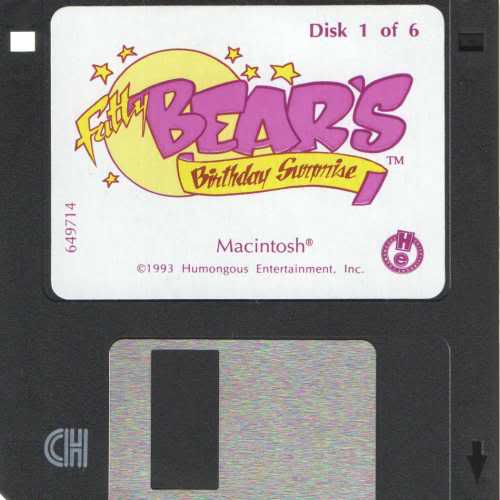 As you can tell by the label, there were 6 disks in all. As for the contents of the disks, well... the datafiles of the game itself are in a .sea folder, which can only be opened on an old Mac with Stuffit Expander installed. Sadly I don't have an old Mac laying around my house, but if anybody happens to know how to expand these files on a Windows computer, let me know and you can help me out!
Moving on, the box itself is interesting. It's much different than the later version of the box that uses Humongous Entertainment's typical art style with the exclamation point in the background. 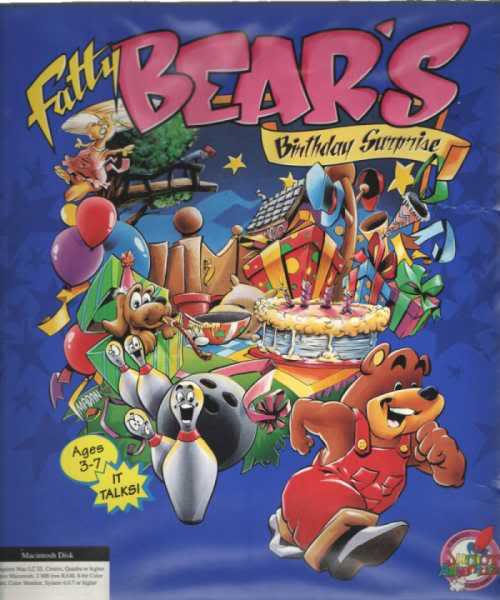 Some of you might have seen the same boxart on MobyGames, which has the box art for the original DOS release. The back of the box is equally as nicely designed as the front. 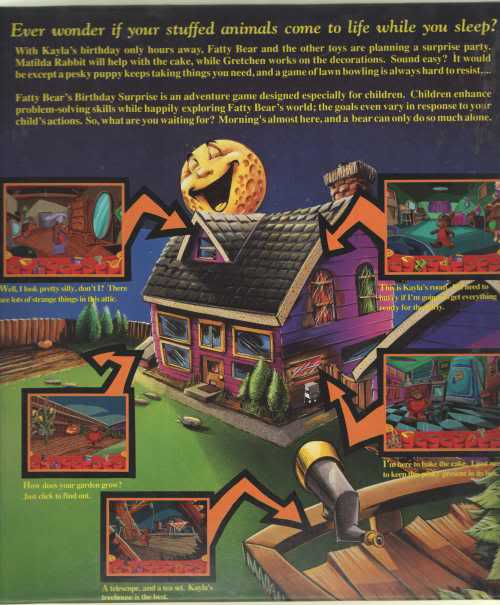 It's a shame that not all of the boxes for Humongous games had nice hand-painted art like this.
The items inside the box make for interesting viewing. First is something anybody who's ever bought an adventure game from Humongous will recognize: The Junior Adventurer's Handbook! This little baby has a whopping 50 pages of activities to keep any 5-year-old busy for a while. Obviouly I can't show every page in the book, but I will show one. 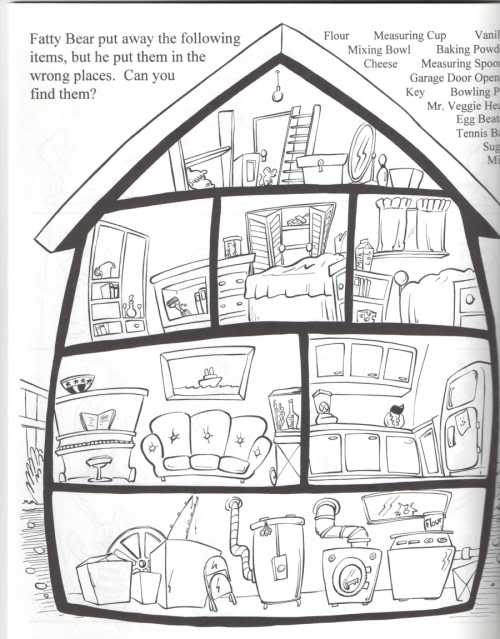 Please pardon the slight bend in the page towards the edge. I had trouble keeping the book level with the scanner. :D
An activity book would be pretty useless without something to draw and write on it with. Thankfully, Humongous had you covered by providing a Junior Adventurer's Toolkit. 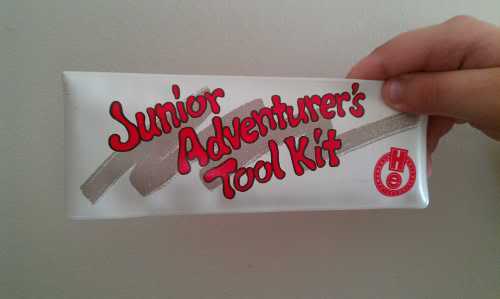 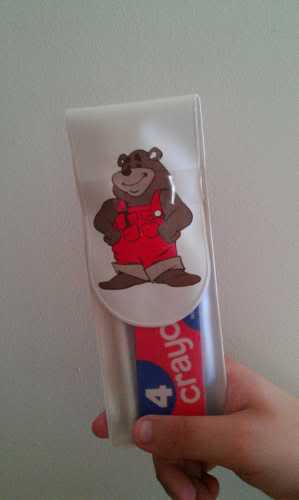 My scanner didn't work very well with these items, so I had my dad use his phone to take a picture of these and the next item. The toolkit consisted of a pencil and 4 crayons. Nothing too fancy, of course. What child wouldn't have at least one box of crayons in their home?

In addition to the handbook and toolkit, there was one other form of non-electronic entertainment in the package. Here's the frisbee! 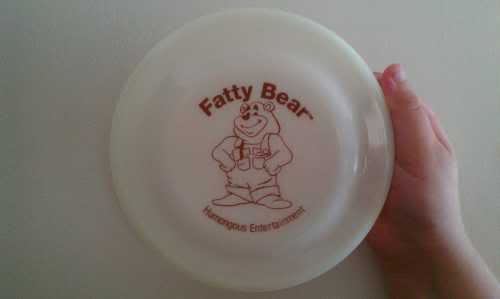 There's nothing to say, really, about this item, other than I'm going to have to keep it away from my dog!
The last two items are probably the most interesting, information-wise. First is an advertisement for the rest of Humongous Entertainments catalog circa 1993. 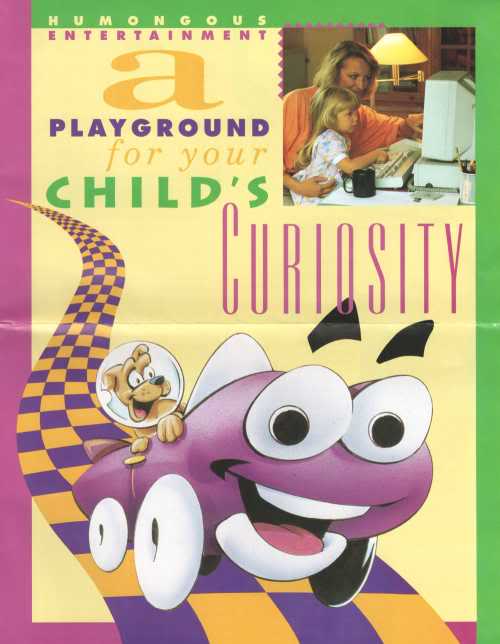 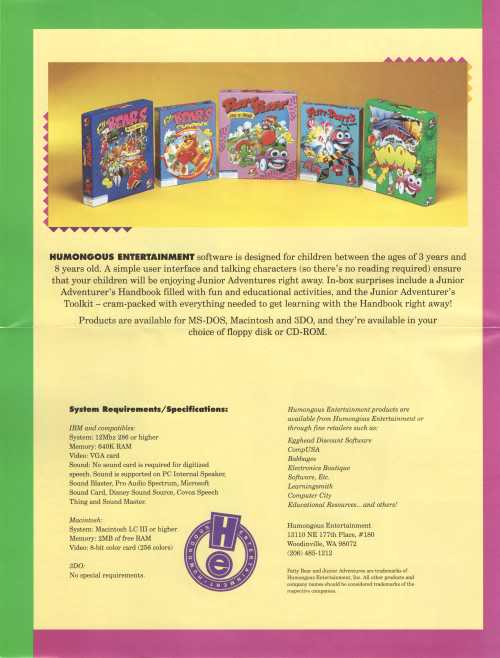 Note: I was unable to get a scan of the inside of the flyer because it was too large for my scanner. I may update if I can find a way to scan it.
First thing you're likely to notice is Putt-Putt's old design. His eyes are much smaller, almost circles, and his design is much closer to his look in the classics. The art was obviously taken from the box of Putt-Putt Goes to the Moon.
Also interesting is that on the back of the advert, it lists the system requirements of the old editions of the games. One of my favorite points is that they tell you that no sound card is required, and that the game can run from the PC speaker, a.k.a the thing that beeps when you start your computer up. I've tried this out myself, and I might upload a video showing it off on my Youtube account.

Last but certainly not least is the order form. Back before we had the internet, people actually had to send in pieces of paper to the company to tell them what they want sent to their home! Can you believe it?! Ok, sarcasm aside, this item provides some really neat information. 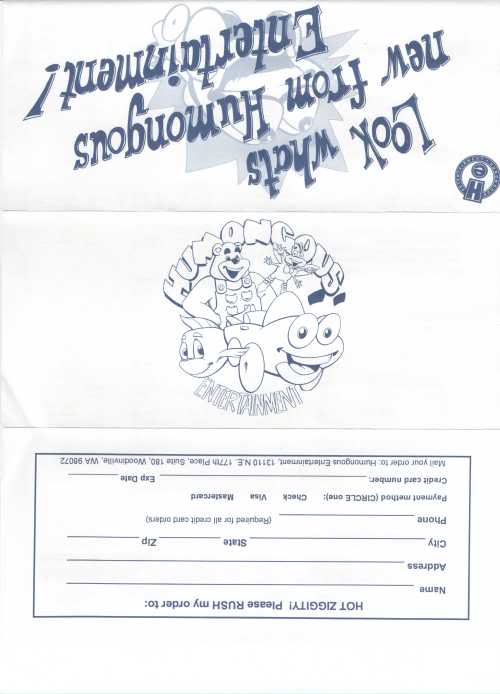 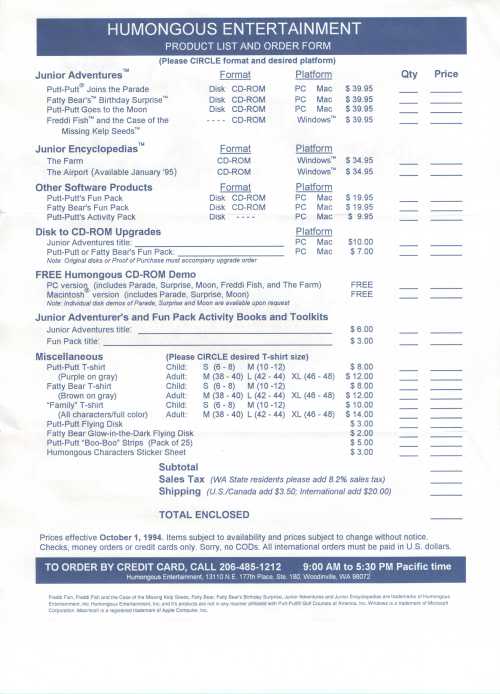 Looking at this order form, I can tell that my copy of Fatty Bear's Birthday Surprise is likely from 1994, since it lists the games up to Freddi Fish 1 as being released and ready to ship. This order form lists that every Humongous game up until Freddi Fish was available on both CD-ROM and Floppy disk. Also, at the time this form was printed, the Junior Field Trips with Buzzy the Knowledge Bug were known by their original name of Junior Encyclopedias. They also allowed you to send in your old floppy disk copies or the proof of purchase of one of your games to receive the same game on CD-ROM. It was a nice move on their part to allow new CD drive owners to play higher-quality versions of their games. They did, however, charge you $7-10 depending on whether it was an adventure or a fun pack. Another nice service was the ability to have Humongous send you a free demo of any of their adventures, as well as The Farm. Finally, you could also order various types of merchandise, such as T-shirts, stickers, and "boo-boo strips".

That about wraps this up. I hope you enjoyed a look at the items found in my rare copy of Fatty Bear's Birthday Surprise. Any comments or questions are welcome, and once again if you know how I could extract the data from the floppy disks, let me know!

Fatty Bear was my first HE game, but it was the CD version.

Kudos on the great scans. And if I find out how you can get the files extracted, I will let you know. :)

I wonder why you decided to put this up?

I put this up because original versions of the HE classics are an extreme rarity, but even more rare is having all the merchandise that came with it AND the game being on floppy diskettes. Besides, I want to show you guys the gem of my collection.

Retrodude wrote:I put this up because original versions of the HE classics are an extreme, but even more rare is having all the merchandise that came with it AND the game being on floppy diskettes. Besides, I want to show you guys the gem of my collection.

Then I probably don't see many people who walk past me with Pajama Sam T-shirts...

Would you ever consider selling this collection? I'm very interested in this rarity and have loved HE since I was a kid.

Possibly in the future, if I ever find no reason to have it around or I'm so short on money I need to sell some nonessential stuff to get by. What I'm really hoping to do is find an older Mac with a floppy drive to try this game out on and see if I can document the differences. Unfortunately, that will take a while since I need to get a job and save enough money first!

Okay man thats cool. If you ever decide, please contact me at nolancho@hotmail.com. Im a serious collector and understand its not cheap. Good luck man.

I've actually..."tried"...the Mac versions of the classics before. They have really weird cursors for one thing (it seems they tried to make them as DOS-like as possible, but I believe Mac cursors have to be 16 x 16 or smaller), but the biggest change is that the MIDI is synthesized through Quicktime rather than the sound card. Unfortunately it's ear-splittingly awful because they didn't bother adapting it for its very different style. It's pretty much the same effect as trying to do it through a PC speaker.
They also made a few changes to adapt to the Mac interface, but one notable change is that it actually comes with a graphics filter. I'm no fan of filtering the graphics, but if you like it, the option is there.
_________________

Posting your email in public is not good man! You can be looking forward to all sorts of spam and nasties! :(

So jealous. A real gem. I just bought Putt Putt Joins the Parade
on IBM floppy. No box art or anything, but still cool. Got it for $1. There's a Macintosh floppy of it on eBay right now I think for about $20. No box art but a rare find all the same! Also, does anyone know anything about "Putt Putt's Fun Pack"? It's on the list of items that came with Fatty Bear ^^ it says it was only available on floppy and it seems to be different from Putt Putt's Activity Pack.

Jealous? We've been looking for that forever! Next thing you'll say that you got the Hebrew editions of PJS2, FF3, PuttCircus, Arabic editions of Parade, Moon, Fatty Bear, UK editions of FF3 and FF5 and German editions of FF5 and PJS3!

I said I got "Parade" on FLOPPY disk. If I'm not mistaken that's a moderately rare item.

What's your definition of moderately rare? Cause it's pretty rare.

No, even the floppies are extremely rare, box or not. They only show up once in a blue moon on eBay, and when they do, they're always incredibly expensive! Plus, to this day, we've never been able to find the floppy version of Putt-Putt Goes to the Moon (we know it exists too, since it's what the Hebrew version is based off). $1 was a steal for those!
_________________

Excuse me George, I thought you were mocking me. I had no idea that Hebrew and Arabic versions of these games were produced! That's wild. I'm hoping I'm gonna find something new or different on these diskettes. I'm working on "Moon" too, I'll keep an eye out for it on floppy.

So was Hebrew Parade, which I've played, and since I could play with subtitles, I could see what they originally said. Parade is FILLED with dialog changes! I'd love to hear them. Ok, if you don't want the disks, feel free to mail them to me! :D

EDIT: I didn't see your next post. I wasn't really mocking you, but you seemed to think the disks are not a big deal, and I do, along with the other games. Thanks! :D

Yeah, Hebrew and Arabic versions exist. I have the derpy older Hebrew dubs, but not the newer ones, or the Arabic ones. I'd love to hear them!!

I'll be sure to try and analyze any dialogue differences I notice! then if they are real different I can make a YouTube video or something :)


So is there any info about that "Putt Putt's Activity Pack"?

Yeah, what exactly did you want to know?

On retrodude's scan of the Fatty Bear order form (that seems to be from '94) it lists "Putt Putt's Fun Pack", "Fatty Bear's Fun Pack" and "Putt Putt's Activity Pack" which it says is only available on floppy.

I was just wondering if anyone knew about this... is it a separate game?

It is. Stars Putt-Putt and has some activities.

Haha no kidding. To find this game would be the highlight of my collection. :D

No... thats "Fun Pack". I said on the listing there seems to be a different game called "Putt Putt's Activity Pack"