Although my only copy of this game came in a box of Golden Grahams, I have noticed on the autorun screen what looks like something saying the game came with free trading cards of the Backyard Kids. Does anyone have pictures of these?

Humongous did this a lot with their older games. Though, I'm kinda wondering if they're talking about the cards included inside the game rather than physical cards. I don't know if we'll get an answer though, given how poorly it sold in its first year.
_________________

They sure did come with cards! A little shorter than your average baseball card, but still quite cool! The back has their attributes with the little baseballs for each category, a small write up, and some vital stats. The fronts are just big portraits of each player. I have copies of Annie Frazier, Maria Luna, Luanne Lui, and Reese Worthington. I'm trying to find more if I can!

Also, since they were new to some people - did you guys know that Pacific made baseball cards of the MLB players and NFL players for BB2000, BF2000, and BB2001? Here are a few: http://www.checkoutmycards.com/Cards,=Backyard+pacific

I had a few but I think I sold/lost them all over time.

Anyway, scans. They're huge, so right click to see all 6 cards in each image. 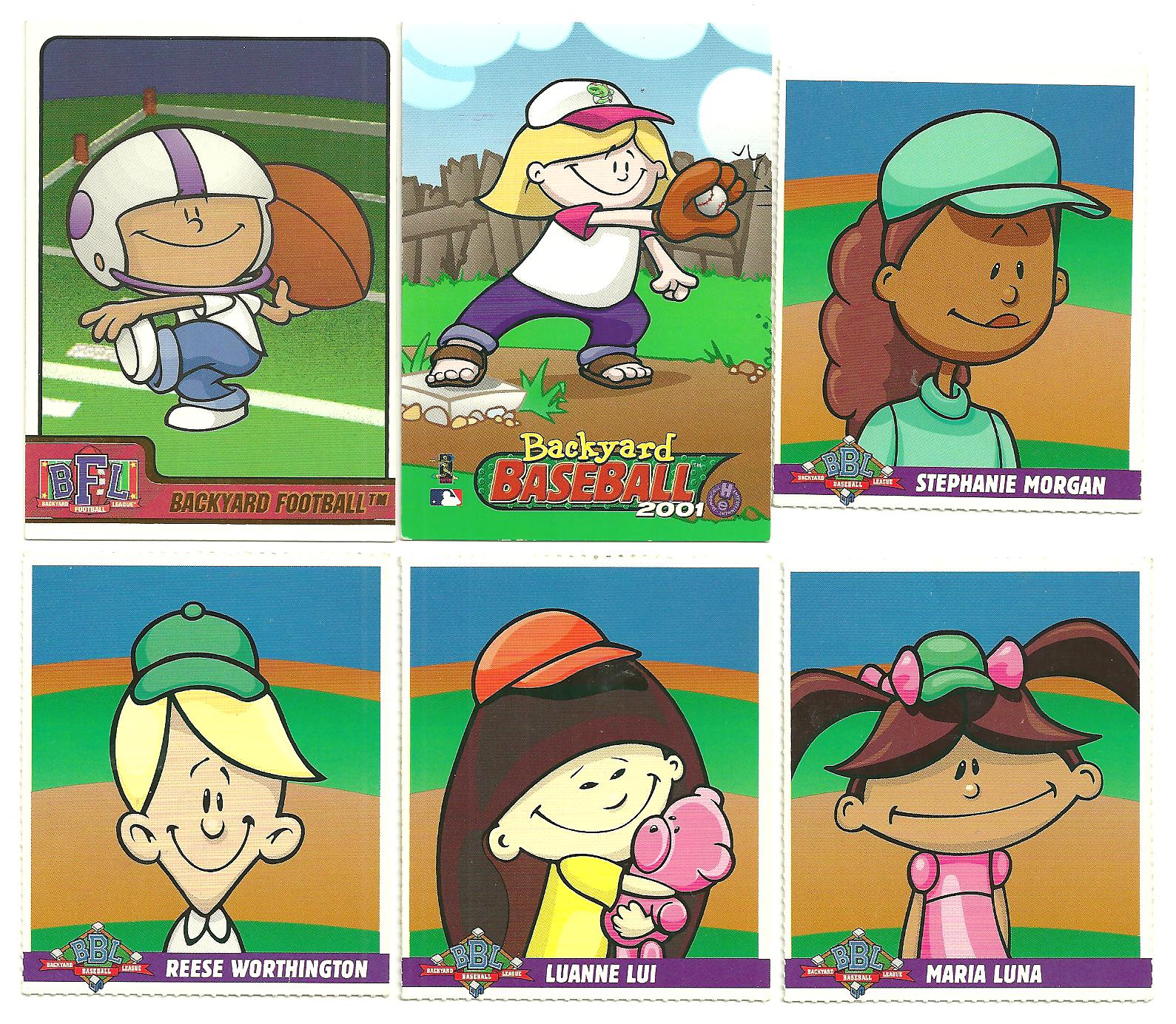 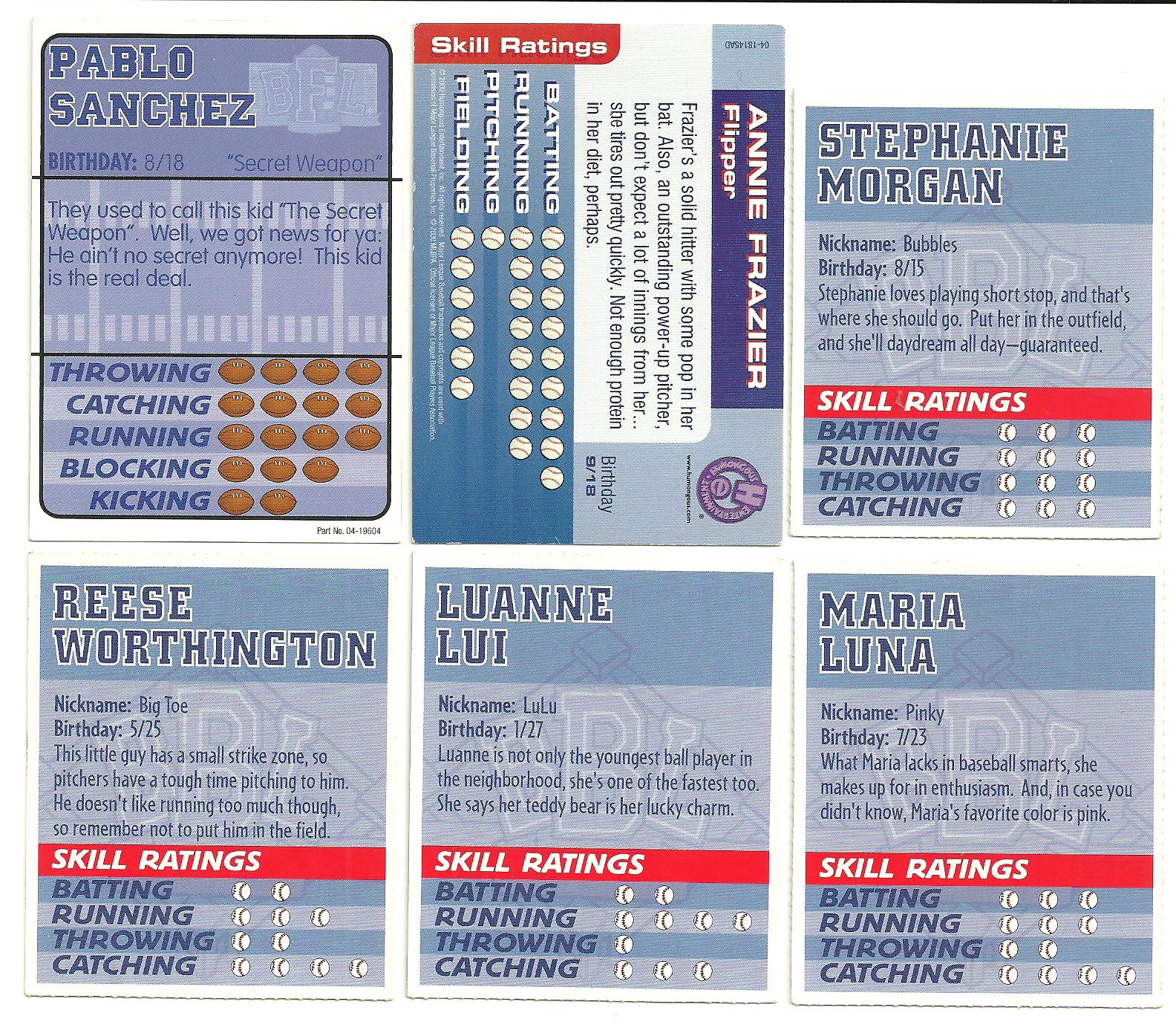 I see that the pitching stat used to never exist and fielding was split into throwing and catching.

Funny, I specifically remember that I got Baseball 2001 back when it first came out, but I never got any trading cards in the box! Were those from some sort of promotional thing, or did I just get a later re-issue?

I think you got a later reissue. I know the MLB player ones (Sosa and Nomar) came with the game itself. I assume Annie did too but I'm not sure!

And Nelson, yeah, the stats shown used to be a little different. Luanne was still an awesome pitcher though - best pitcher in the game!

No problem! I'm hoping to find more. I'm on a bunch of card sites too and I mentioned the game and someone else remembered the cards!

I found some online!

I too remember these cards. I know for a fact I had some but they have since been lost. After reading everyone's posts on here, I did a little search and found only 1 listing on eBay. What do you think?

Fantastic price for what it is. If you don't buy it I will, as I only have 4 of those 8! And Pablo Sanchez is one of my missing cards!

(Also your username is awesome!)

SpastikMooss wrote:Fantastic price for what it is. If you don't buy it I will, as I only have 4 of those 8! And Pablo Sanchez is one of my missing cards!

(Also your username is awesome!)

Why thank you! Just for that, I am gonna let you go for the cards as my inspired search yielded a Pablo Sanchez! I also found Mikey and Reese. I'm totally content with that so go get your Pablo!

Lol I was just coming on today to say you should grab them - I'm over my Ebay limit for the month hahaha. Maybe they'll get reposted and I can grab them in June haha.

I didn't know there were actual trading cards for these. And awesome find, pezhead!

These are all nine (9) of the cards from the Original Backyard Baseball. They came in the game box on one perforated sheet. 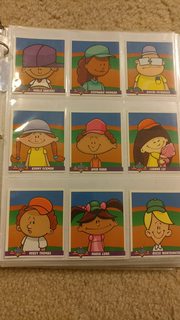 Backyard Baseball 2001 had a pack of cards with eight (8) Pro player cards and two (2) Backyard Kid cards.
As of now, I can confirm that there are eleven (11) different pro players and five (5) different Backyard Kids that you could have pulled with these packs. These were from the Pacific 2000 series. 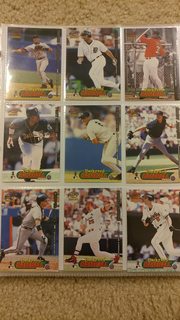 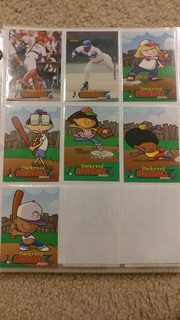 Around the time that Backyard Baseball 2001 came out there was a cross promotion with Twizzlers. On specially marked bags of Twizzlers there was a single card that you would receive. there were twelve (12) different cards total. These were made by Fleer in their Traditional series. There are no Backyard Kid cards in this set. The two missing cards here are of Pedro Martinez and Kenny Lofton.

In addition, you see here promotional cards that came in a pack with the Backyard Baseball 2007 demo disc. As far as I know these five (5) are the only cards in this set. 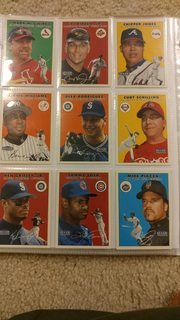 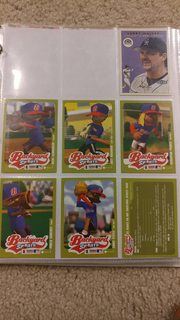 Finally, Backyard Football also had some cards. In the original release of Backyard Football you would receive a pack with eight (8) pro players with two (2) random Backyard Kid cards. This was similar to the Backyard Baseball 2001 card set. However there are only eight (8( pros in this set and a whopping ten (10) total Backyard Kid cards. The three that are missing the pictures are Angela Delvecchio, Marky Dubois, and Reese Worthington. This set was from The Pacific 1999 series. 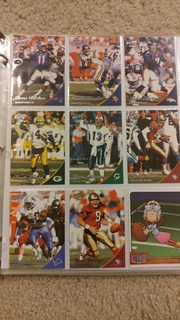 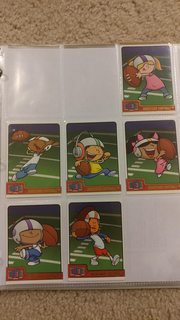 If you happen to have the Angela Delvechhio or Marky Dubois Backyard Football cards let me know as well! At the very least I would like to know what they look like.